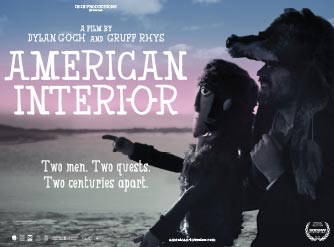 In 1792, John Evans, a twenty-two-year-old farmhand from Snowdonia, Wales, travelled to America to discover whether there was, as widely believed, a Welsh-speaking Native American tribe - The Madogwys - still walking the Great Plains.

During the course of an extraordinary adventure, Evans wrestled the largest river reptiles ever seen in the Mississippi, hunted Bison with the Omaha tribe, defected to the Spanish in St Louis, discovered imaginary volcanoes in Missouri, annexed North Dakota from the British, and created the map that guided Lewis and Clark on their legendary expedition.

In the summer of 2012, over two hundred years later, Gruff retraced his (extremely) Great uncles route through the heart of the continent by means of an “Investigative Concert Tour ™" - a series of solo gigs that saw him accompanied by little more than acoustic guitar, PowerPoint presentation and a three-foot high felt avatar of John Evans.

Starting at Yale University’s Beinecke Library where Evans’ famous map is said to reside, Rhys fully immerses himself in concerts, recording sessions, and conversations with journalists, academics, psychiatrists, and locals on Evans’ route.

From Baltimore to St. Louis, up to the Mandan Reservation of North Dakota and down the Mississippi basin to the Old Governor’s house in New Orleans. Rhys investigates Evans’s significance in American history, the true circumstances of his death, and the lost location of his final resting place.

American Interior is an exploration of how wild fantasies interact with hard history and how myth-making can inspire humans to partake in crazy, vain pursuits of glory, including exploration, war and the creative arts.

American Interior the film, is one part of a pioneering multi-platform project with a global reach set to hit UK screens on 9 May 2014. The project also consists of Rhys’s solo album with tracks from the film (Turnstile) and a hardback, paperback, e-book and app about the life of Don Juan Evans also written by Rhys (Penguin). Both are also set for release in May 2014.